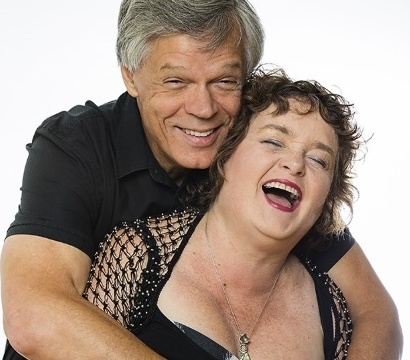 SUZI & DOUG have a performing career that spans 35 years. In the mid-80's, they could be found in clubs around Toronto like the Café on the Park, Fitzgerald's, and the Groaning Board. But as time unfolded, so did they. Moving on to individual careers, they went their separate ways: Doug moved to the West Coast; Suzi stayed home and became a Mom.

But just a few short years ago, a chance encounter reunited the pair. Now, after a 27 year break, Suzi and Doug are together again, playing their unique blend of standards and originals in clubs, concert halls and music festivals. With an eclectic mix of jazz, blues, originals and old favourites, with some boogie-woogie and rock 'n roll to spice things up a bit, Suzi and Doug are seasoned professionals. They have appropriately entitled their first CD “Always”.

Suzi is an actor/singer who cut her teeth on jazz. She’s also sung with Dixieland, Blues and Rock bands. Suzi toured extensively with Les Misérables, waltzing her way across a dozen or so cities, travelling as far afield as Honolulu and Anchorage. Suzi was featured as part of Jazz FM's One-Stop Vocal Jazz Safari. Lately, she's been trotting out both her big band and blues chops, singing with both The Uptown Swing Band and the Dark Angel Blues Band.

Doug has played, conducted and arranged just about every style of music going. An accomplished classical pianist, composer and accompanist, he has also music directed shows across Canada(Forever Plaid, Ain't Misbehavin'). He's played in big shows (Wicked, Phantom of the Opera, Ragtime, Sunset Boulevard); in big bands (Forever Swing) and everything else from Dixieland to rock 'n roll. He's still rocking as the latest addition to Robbie Lane and the Disciples.

With the Dark Angel Blues Band

Concerts in the Park series with the Algonquin Highlands Quartet

With the Dark Angel Blues Band

Everybody's Got a Thing with Marty, Live Taping

Music in the Atrium Series

Before we were so Rudely Interrupted - (Live Stream)

Jazz in Toronto: Spring will be a Little Late this Year (Live Stream)

Jazz in Toronto: Some Other Time (Live Stream)