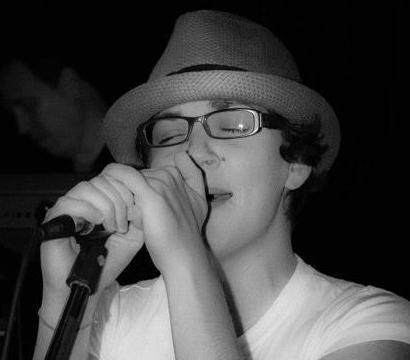 I have been playing music since I was 10, but infatuated by it since before I can remember. I started playing guitar a bit when I first started but I could tell I was much more of a writer. I threw myself into writing and actually got into the rap scene for awhile. I never thought of myself as a singer, my sister was always the one in our family who could sing. I gave it a shot and thought 'hey, this chick sounds kinda good.' From there I began exploring my vocal skills.
When I was about 11 I joined my school band and jazz band and started playing drums and percussion. I figured out the basics of guitar and bass on my own, but learned drums via private lessons. I loved playing percussion and had so much fun, especially after seeing Sheila E. perform with Ringo Stars All-Star Band. I wanted to be just ike her.

Once I reached high school I had met, Rodrigo Ibieta Jr. He was my neighbor and quickly became my closest friend. He is a very talented musician. He can play many instruments, and well, and has become very gifted in sound and production and has developed his own studio. Him and I would play and write practically every day and I owe most of my motivation and inspiration to him.

Him and I played together throughout high school and I finally got the courage to play live once I was about 16. I began perfoming monthly at a local coffee shop and developed quite a following within my community in Tempe, AZ.

In 2007, I went up to Northern Arizona for school and there I met Brogan Boyd. He was a fellow musician from Phoenix who was in a band. His drummer still lived back in phoenix so he had asked me to sit-in on some shows playing drums and singing back up. We quickly realized how well we worked together and I began writing and performing more songs with  him and his band. We both had moved back to the Phoenix area and continued playing together.

With the help of Rodrigo and his father's band, Catfish Groove Farm, I was lucky to have been asked to have my music produced by band member, Jamie Bludworth and Rodrigo Ibieta Sr. With their talent and the support of the poeple around me, I completed my album and it has been mastered, labeled and distributed.

I've perfomed in many contests and many festivals and venues throughout the Central and Northern regions of Arizona. However, I had always felt like this wasn't the place to be in order to really make a wave.

Brogan I decided we needed to make a move and go somewhere that we could really spread our music and be heard. Brogan had mentioned Nashville, though I was hesitant at first, I looked into it and agreed that we should go there to pursue our dreams. We have recently moved here and are, so far, loving it. I have a feeling this is my home.

B.T. and the Boombastics at Daisy Duke's

Brogan Boyd and Taryn Shaw have joined forces to create B.T. and the Boombastics. A natural blend of each others style that can bring you to a pleasant and calming state.

PURCHASE MY NEW ALBUM ON iTUNES or here http://cdbaby.com/cd/taryndactle ALSO FIND ME ON SPOTIFY!!!!

As of today I have officially gone worldwide! You can purchase my NEW ALBUM on iTunes and CDbaby or find me on Spotify! iHeartradio, last.fm and many other music apps will be featuring my music as well!! This marks the completion of my album. Thank you EVERYONE who helped make this a reality!

After a 5 day journey, I have successfuly made it to Nashville with nothing but motivation on my side. The city is gorgeous and the people are wonderful. The music scene is outrageous and I can't wait to to get my feet wet! Stay tuned for more updates on my new adventures!

BT and the Boombastics at Daisy Duke's