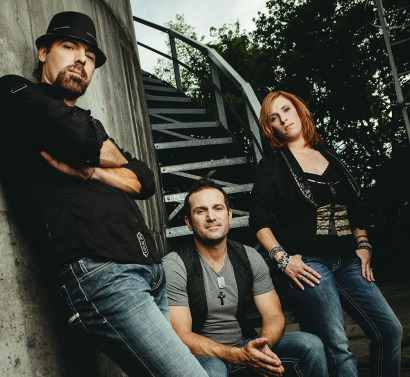 Hailing from Taylor County, West Virginia, country group Taylor Made is comprised of siblings Wendy Williams, Greg Duckworth and Brian Duckworth. The group’s hallmark, is their three-part sibling harmony. “Our mom taught us to sing,” explains Wendy. “We would all sing on the back porch and the neighbors would holler out songs they wanted us to sing.” Despite being raised in a home where music was a way of life rather than a hobby, the siblings of Taylor Made are the only three out of the seven total Duckworth siblings who have taken to performing as adults.

Initially pursuing solo careers, the siblings formed trio I-79 just days before the Colgate Country Showdown with hopes of competing in and winning the competition. Not only did the group win first place, but each individual member also came to the realization that they operated best when performing together. “We started with an acapella note on the first song and, coming out of that big system, there was definitely a ‘wow’ feeling,” Greg says. “It sent a charge through the whole room. You could feel it,” Wendy adds. “We had never experienced that before.” That moment of harmonic convergence wasn’t lost on the crowd – local venue owners were no exception. “We realized we’d been missing that third voice,” explains Brian. And the day after the show we started getting calls from people wanting to book us. It snowballed from there.”

They began playing clubs, honky-tonks and fairs throughout the region. After their first single charted high on both Independent and Music Row charts, the group signed with West Virginia based record label, Little General Records and released “Good Love”, produced by songwriter/producer Dan Mitchell (“If You’re Gonna Play in Texas You Gotta Have a Fiddle in the Band”) and did so well they won New Vocal Group of the year in New Music Weekly. Their next single, “Things You Don’t Grow Out Of”, made it to #36 on the Billboard Indicator chart, #19 on the Music Row chart, and earned the group MusicRow Magazine’s Independent Artist of the Year for 2012. Their new single “Somewhere Between”, co-written by Wendy, Greg and Brian is just being released through Tenacity Promotions.

In each facet of their music, Taylor Made reflects the true spirit of the hard working men and women who come to their shows. “We’re real,” Wendy says. “We’re all bringing our personal experiences to the table. We’ve lived these songs. We literally started on a back porch in West Virginia – and we’re going to play every place that will have us.”

Taylor Made was in the Nashville offices of Tenacity Promotions gearing up for their next radio tour of the North East, Central and South Eastern parts of the U.S.

The sibling trio is so excited to hit the road promoting their new self-penned single "Somewhere Between". Wendy is quick to acknowledge their co-writers, George Cumbest and Sean Gasaway, both Mississippi natives.

Taylor Made's latest single "ßomewhere Betweenæ featuring Wendy on lead vocals has been released Nationwide! It's already getting adds at radio and looks to be a hit!

LIttle General Records is pleased to announce that they have joined forces with Tenacity Promotions, a Nashville based promo team.

"It's a great team and combined with our regular promotions team of Tom McBee and Associates we're looking for great things" says label owner Greg Darby.

Look for Taylor Made's new CD, Taylor County Line on itunes, next week. Or but a LIMITED EDITION CD at their shows this Memorial Day Weekend at their WV concerts!!

Taylor Made will only be appearing June 7 and June 8 at Fan Fair this year due to "scheduling conflicts". Get out and see them wnile you can at their own booth!!

Music Row Magazine has chosen TAYLOR MADE as their 2012 INDEPENDENT ARTIST OF THE YEAR!!!

They will be presented the award February 26 at the Music Row Awards in Nashville, TN!

"That's What Life Is"

The new single "That's What Life Is" continues to break personal Taylor Made bests. In its 5th week the single has climbed to 46 on Billboard Indicator and 44 on Music Row Charts as well as in the 50s in Mediabase!

For the latest news go to:

For a cool surprise, Check out the new video by Taylor Made HERE in the video section!
Back

For a current list of shows and dates visit us at: