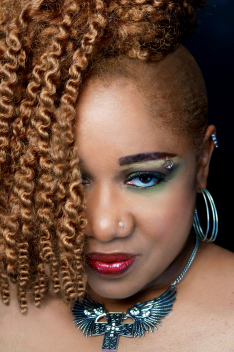 INAYA started out singing in church as a child, then went on to do musical theater... ( broadway, off broadway, Euro theater, etc. )
She was living in Germany when her first, second, and third house music singles were released. They each championed the charts and are now all worldwide classics.

Just before the end of it’s run, INAYA performed twice on the legendary UK Top 40 TV show, “TOP OF THE POPS and is said to be the ONLY artist in history to perform on the show twice in one week.

INAYA’s song KEEP PUSHIN was recently re-recorded by pop star, DUA LIPA for the ADIDAS: “Original Is Never Finished” campaign and one of her R&B ballads, “HOW MANY WAYS” was just played on QUEEN SUGAR.

Her single, NASTY GIRL, was featured during the dance scene in the movie, “Dan In Real Life” starring Steve Carell.

INAYA’s songs can also be heard on commercials and TV shows like “NEIGHBORS”, “QUEER EYE FOR THE STRAIGHT GUY”. “QUEER AS FOLK”, “ALL MY CHILDREN”, “BLUE WATER HIGH” and more.

INAYA does it all. She’s a label owner, publisher, songwriter, bandleader, producer, and even made a foray into film when she acted and sang in a movie called, "WHO SHOT PAT?" starring SANDRA BULLOCK.

Keep an eye and an ear out! That voice is everywhere!

“Your talent is beyond measure. You sing with a voice I wish I had.
You are my muse. You're wonderful!
Thank you for always inspiring me.
Frankie” - Frankie Knuckles the GodFather of House

Iʼm "HORNY", "HOLD YOUR HEAD UP HIGH", "NASTY GIRL",
"KEEP PUSHIN", “I AM THA 1”, “STAND BY ME”, “GLAMOROUS
LIFE”, “MOVIN UP” and much much more... all recorded by the one
and only “Queen of Spins”, INAYA DAY
INAYA has been in dance music for over 20 years! She's had
numerous UK, Aria, and Billboard top tens and is still going strong!
Just before the end of itʼs run, INAYA was the ONLY artist in history
to perform on the famed UK top 40 TV show, TOP OF THE POPS,
twice in one week. So, we can say sheʼs made music history.
“You are incredible...you've remained vital and fresh for SOOO long in an
industry where so many come and go so quickly. Cheers to you...THATʼs
an achievement (and I know the hard work that goes into it.) xoxo”
- Don M. Robinder of Next Magazine

Every time I see ya perform I get chills. Takes me back to Halloween at
Montage , birthdays at Rich's (San Diego) and Bourbon ..... And who
could forget Paradiso in Amsterdam . You are so talented not only as a
singer but as a great friend who has lifted spirits and made people
including me forget about our problems ...... Looking forward to rocking
the house with ya many more times...And from Broadway plays , to
touring the world , to starting your own group , slaying White Party ..... All
while rocking my favorite feathered mic in the world ...... WHAT ELSE IS
MORE ROCK AND ROLL THAN THAT - DJ Chris Ryan, San Diego

Your talent is beyond measure. I don't know why it's taken so long for us to
come together but, I'm glad we have. You sing with a voice I wish I had.
You are my muse. You're wonderful! I hope and pray and, will do my very
best to always make sure what we have is as good as this or, BETTER!
Thank you for always inspiring me.

Playbill -The 10 Most Magical Moments from The Wiz's 40th
Anniversary Celebration!
By Logan Culwell 13 Aug 2015

Dorothy's biggest songs, "Be a Lion" and "Home," were performed by Inaya
Day, a studio singer famous for her vocal performances on several house
music tracks and a former understudy to original Dorothy Stephanie Mills
(during the 1990s tour). She sang both numbers with incredible emotion
and vocal ability to the loud approval of the audience, particularly the Wiz
alumni section that clearly held several of her former castmates. "Home" in
particular, as the finale of the concert, received an almost-instant standing
ovation from the entire audience. - See more at: http://www.playbill.com/
news/article/the-10-most-magical-moments-from-the-wizs-40thanniversary-
celebration-357530#sthash.XqtIdjN1.w86nST6Y.dpuf

Inaya on fire goin higher with desire & I'm not a liar and I'm not joking Like
Richard Pryor, so once again congratulations inaya.
- Lou George, Jr. pka Bowlegged Lou of Full Force June 8. 2016

You are incredible...you've remained vital and fresh for SOOO long in an
industry where so many come and go so quickly. Cheers to you...THAT is
an achievement (and I know the hard work that goes into it.) xoxo - Don M.
Robinder of Next Magazine 5/30/2016

You really ARE inexhaustible—your mojo has some killer legs, cause
you've completed the equivalent of several marathons in the realm of
house music. My much more expressed (and lithe) 32 year-old self was
working' it out to "Keep Pushin'" in '96 every weekend (name the dance
floor, I was on it!) Besides, anyone who can go from working with the roster
of luminaries you have, writing for Randy Crawford (and Missy) and then
span 20 dynamic years ON YA' OWN in house, well DAMN. - Don Robinder
of Next Magazine 11.30.2016

The only thing lacking from the 90s reboot craze has been a diva
renaissance. Just where exactly are the powerhouse vocalists who can
sang? Inaya Day is ready for her close up with a pretty amazing
interpretation of the M People classic. There arenʼt many out there who can
stand up to Heather Small's legendary vocals and Miss Inaya proves she
can stay true to the original and inject her own personality and flavor.
- DJ Ron Slomovicz 4.22.2016
See more at: http://www.clubplanet.com/Articles/11171/SUNDAY-FUNDAYToy-
Armada-and-DJ-Grind-ft-Inaya-Day-One-Night-in-
Heave#sthash.BAj3lCvb.dpuf

No studio magic, no voice modification. Just hard work and trained talent.
You’re more than just one of Billboards greatest of all time, you’re pure
vocal skill and strength, both on and off the stage.
Thanks for keeping my dance floors full.
DJ Corey D - 12.13.2016

I was absolutely thrilled and surprised to see Inaya Day at this year's White
Party in Palm Springs. Not only did she and "One Night In Heaven" climb to
the top of my White Party memory pole, the track will definitely be at the top
of my summer playlist! - EthanSays.com / Ethan Flaegar 4.18.2016

Best moment in many years when you sang this INAYA. You can't beat a
song with heart! Your performance was my favorite of the weekend.
I think far too often we forget that the things that started in these events,
soul and house singers singing to great anthems, are what made the
biggest impact, they reminded us how far we've come, the family we've
created for ourselves, and the strength that we embody in a song like that. I
felt every one of those things when you sang your songs. In the 5 years I've
been, it was my favorite performance to date. Everyone left happy, elated,
and full of pride. And that is the point after all isn't it? -Robbie Eric on One
Night In Heaven performance at White Party- 4.14.2016

INAYA DAY vs Leggz & Femi B: Take Me Up:
You didn't stop the rain, you let it pour
Cause you knew I needed to grow
And you sheltered me from all of the pain
And you never let me go...
I first heard this track (by INAYA DAY) in 2009, during a particularly horrible
point in my addiction. It's one of the songs that has given me strength to
keep fighting through it all. I firmly believe that without house music (and
music in general); I'd be dead. I thought something a long time ago that has
been proven so true - God lives in the beat, in the music that I love so
deeply. Almost every one of my favorite tracks is about perseverance,
redemption, hope, love, and being lifted up. Thank God for another day
clean... - John Hurst 4.12. 2016

Every time I see ya perform I get chills. Takes me back to Halloween at
Montage , birthdays at Rich's (San Diego) and Bourbon ..... And who could
forget Paradiso in Amsterdam . You are so talented not only as a singer but
as a great friend who has lifted spirits and made people including me forget
about our problems ...... Looking forward to rocking the house with ya many
more times...And from Broadway plays , to touring the world , to starting
your own group , slaying White Party ..... All while rocking my favorite
feathered mic in the world ...... WHAT ELSE IS MORE ROCK AND ROLL
THAN THAT - DJ Chris Ryan, San Diego 4.12.2016

To the incomparable Inaya Day for delivering a truly jaw-dropping
performance (A White Party Palm Springs 2016). Your live set last night
was nothing short of magical, and I'm so grateful to be embarking on this
next project together #OneNightInHeaven- DJ Grind 4.11.2016
She totally rocked it nobody was left standing still FIERCE...
-Troy Bronstein, T-Best Talent Agency on INAYAʼs White Party
Performance 4.11.2016

"the diva emerged to take to the stage. And let me say, Day is like a force
of nature. What an incredible, powerhouse voice. Amazing! And if you ever
have the chance to hear her live, people, don't miss out. Inaya sang
"Movin' Up (Take My Problems to the Dance Floor)" and got us all movin'.
Up, down, sideways and swirling around to that great Mike Cruz club
smash from '97. It hasn't aged a day as a rousing dancefloor tune. She
followed that her latest # 4 Billboard club hit with Dj Escape, "Make Some
Noise," and fabulous noise it was. Dj Buddy B was making his own noise at
the sheer joy of experiencing that live. -Buddy Beaverhausen, Leave it to
Beaverhausen Club owner-promoter-former label exec, Chuck Robinson on Inayaʼs
performance at the 2015 Bourbon Street Extravaganza (BSE) for

Southern Decadence:
Inaya set the pace for this BSE with that power driven earth shaking you
can't escape it feeling as she pulls every instinct out of you to go wild with
her in her music ! Kawow !!!
Radio 105 Italy

Singer Inaya Day stunned the audience with her powerful voice as she
sang songs such as “Be a Lion” and “Home” as Dorothy. After singing the
latter song, she received an almost instant standing ovation as she closed
out the show, according to Playbill.