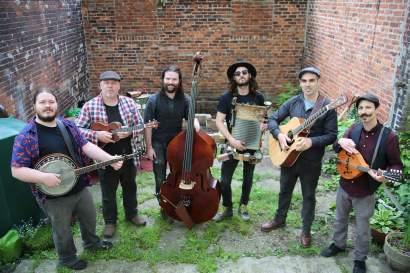 The Observers take you on a journey of human experience. Their music allows you to travel through a myriad of emotions from tear in your beer ballads, remain in your brain melodies, and even down home, foot stompin' hootenannies. They have established a sound that transcends their given genre.

"...Ever since developing their indie folk off the city’s west side, the Josh Gage, Allen Greystone and Ben Perrello-led sextet have been one of the region’s hardest working bands—and one of its most talented." -The Buffalo News, Michael Farrell - January 9th, 2015

"Refined songwriting skills are matched with clever acoustic interplay, pointed vocal harmonies...all culminating in a sound that is rooted in folk but with a leash full of slack." -Buffalo Blog, Mathew Polowitz - May 6th, 2014

Go to the Heron facebook page and Watch/Listen LIVE!!!

Marty at Mohawk Place has put together a show for the local acts that submitted videos for NPR's Tiny Desk Concert Contest. The Observers, along with tiny rhymes, Appelenium, Folkfaces, Tom Stahl and others will be playing. 8pm

Check it out here! https://www.youtube.com/watch?v=yU_MiRnncHA

Michael Farrel dd a nice write up about us for tomorrow's show at Nietzsche's!

At this point in their existence, it seems less likely that you haven’t seen the Americana-driven Observers than you have. Larkinville. Hot Mama’s Canteen. Dinosaur BBQ. Babeville’s Ninth Ward. They’ve seemingly canvased Erie County barrooms with tracks like the sublime “Barbara and John” or the boot-stomping “Movin’ On.” Ever since developing their indie folk off the city’s west side, the Josh Gage, Allen Greystone and Ben Perello-led sextet have been one of the region’s hardest working bands—and one of its most talented. If you haven’t seen them yet, get down to Allentown on Saturday for an introduction.

Before you go, listen to: “Good Enough For Me.”

Can't say too much now but come January we should have something pretty awesomer to report about a potential team up with a local staple. Stay tuned!

Proud to announce that we are playing at the 9th Ward with our very talented friend Jen Whitmore!

Well we have had a long summer full of gigs! We plan to take a little break but stay posted for upcoming shows and events in the fall!

We have awesome shows coming up at Babeville's 9th Ward and Elmwood Festival of the Arts to name a few! Check out out Show tab to see where we're playing next!

Hey All! We just want to thank all of our friends, family and all of our fans for coming out in force and selling out the 9th Ward this past Saturday! We are very grateful for all your support, thank you!

The Observers release debut disc steeped in indie-folk and Americana

Like a homegrown hybrid of influences including Yonder Mountain String Band, the Decemberists, acoustic Jethro Tull and Bon Iver, the Observers grew out of a musical meeting of the minds between Allentown-based musicians Josh Gage, Allen Greystone and Ben Perrello. All three are songwriters, singers and multi-instrumentalists, with a common core formed from a shared love of indie folk and Americana.

The group has expanded to include the talents of fiddle player Jonas Gage, flute player Jeannine Giffear, banjo player Tyler Wetcot and bassist Matt Eppolito. In the process, it has emerged as a harmony-heavy acoustic-based ensemble boasting both instrumental chops and songwriting smarts.

The band has labored to capture the rootsy and rustic nature of its ensemble interplay in the recording studio, and the result is a self-titled debut disc. The Observers, along with friends Savannah King – another bright, young hopeful on the Buffalo singer/songwriter scene – and Fredonia-born roots-soul outfit Lady Lush & the Vinyls, will take over the Ninth Ward at Babeville (341 Delaware Ave.) at 8 p.m. Saturday. Tickets are $8 advance, $10 at the door (box office, Ticketmaster).

Artvoice - See you There Article!

A blend of folk and indie rock, the Observers epitomize the idea of an Allentown band. Holding banjos, flutes, acoustic guitars, an upright bass, and the occasional mandolin, fiddle or ukelele, the seven-piece band has hit their stride on their latest full-length record. The self-titled record ranges from worldly folk-guitar pieces like “Headin’ West” to what the band likes to call “tear in your beer ballads” like “Sad Cabaret,” led by precise vocal harmonies and rhythmic guitars. On the flip-side, they have no problem transitioning into up-tempo sing-alongs like “Movin’ On.” The Observers will celebrate the release of their self-titled record this Saturday (April 19) at Babeville’s Ninth Ward with support from the lovely and talented Savannah King and Fredonia soul-pop band Lady Lush and the Vinyls.

We are proud to announce that our CD Release will take place at The 9th Ward on Saturday, April 19th with Savannah King and Lady Lush and the Vinyls! Awesome line-up! Doors at 7pm, music starts at 8pm. We will update ticket information soon.

Our album is in the process of being printed and we will be relerasing it online through our bandcamp page on April 19th! We will be doing a live release sometime between the end of April and May so stay tuned!

We raised more then our goal and are in the process of ordering shirts, posters, stickers and our debut cd! Thanks to everyone for their support!

We got the final, mastered copy of our album today.It's great! Can't wait to share it with you! We will have an album pre-sale any day now through bandcamp and a cd release party in April! Stay tuned fellow observers...

We played at The Burchfield Penney Gallery last night and had a blast! Big ups to Sonny Baker for hooking us up with the Show. It was awesome to play in such a beautiful gallery to so many people. Ben even signed his autograph for an energetic fan!

We have a kickstarter page up now to help us fund the production of our Debut Album that will be coming out in April! Help if you can and please share the page! Thanks, you rock!

Mardi Gras party at Birdhaus at 925 Central Avenue, Dunkirk, NY. The Observers start the show off at 8:30, followed by The Folkfaces at 9:30.

We are playing the Showcase at 8pm for Josh's Birthday!

Supporting our block club for this great party!

We are proud to announce that our CD Release will take place at The 9th Ward on Saturday, April 19th with Savannah King and Lady Lush and the Vinyls! Awesome line-up! Doors at 7pm, music at 8pm.

Milkie will be putting on his tradiotional light show as we play with Lady Lush and the Vinyls, fresh off our sold out cd release at 9th Ward!

A celebration of things Co-op at The North St. House!

We will help bring in the first weekend of the Lancaster Farmer's Market. Shop for great food and get your fill of The Observers!

Our first time at Sportsmen's! Looking forward to playing on their new stage!

We are proud to be opening for Annie Girl and the Flight who are coming through town on a national tour. Doors at 7pm. We go on at 8pm. Annie Girl at 9pm. $5 presale at Tickets.com, $7 the night of.

Doing our monthly gig at Milkies. Opening band to be determined.

Doug Sitler's Night Lights with The Observers out in Ellicottville!

Psyched to be playing this show with our good friend, Joe Donohue and his band The Albrights, one of Buffalo's best! We should go on around 10pm.

We will be playing the back stage at Nietzsche's during the Allentown Art's Festival. Will be a blast!

An entire evening of music and art at the Silo's!

This is a can't miss show! Mutual Benefit, the brainchild of Jordan Lee has been getting a lot of attention from famed music outlets like Pitchfork and Stereogum. Couldn't be more excited about this show! $10 presale, $13 the night of.

Lady Lush and the Vinyls release their debut cd and we will be opening the night. They played with us for our cd release and if you are a music lover, you will dig this soul-pop group!

We will be the entertainment for The Bison's Party area where you can buy wine tasting packages!

Tunes in the Tent

Elmwood Festival of the Arts

Elmwood Festival of the Arts

Night's of Fire at The Heron

3 day festival, August 29th-September 1st. will update with the days and times we are playing when we know!

Come celebrate Mardi Gras with us at Hot Mama's Canteen!

Come celebrate Josh's Birthday as we do a set from 8-9pm for the Monday Night Showcase. Open Mic to follow immediately after.

We love our block club! Come support the VETTE Block club and hang with us!

On All WNY Radio. Will post the link after taping!

w The Younger Gang and Pine Fever. 10$ presale, 12$ the night of. Details on our facebook page

Tunes in the Tent

Ellicott St. at Virginia, Outside, Tunes in the Tent lunch series by the Buffalo Medical Campus.

Opening for legendary Bluegrass and Folk artisit, Peter Rowan. Founding member of Old and in the Way.

Yes!!! We get to play the Blue Heron! In the Dance Tent!

w/ The Doorway Talkers and Folkfaces!

w/ Intrepid Travelers for The Night Before Thanksgiving!

Go to the Heron facebook page and Watch/Listen LIVE!!!

Summerfest! Will update with Schedule soon.

Come celebrate our 2nd cd! We also have it printed in Vinyl!

Part of the Bluegrass Series

w/ Crikwater and The Middlemen

The Observers 3 play outside