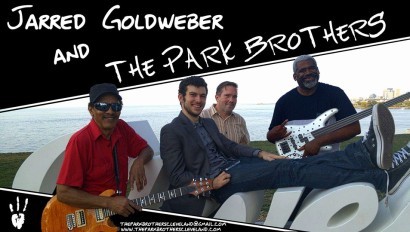 Jarred Goldweber has received national recognition for his new age harmonica style and his classic flair. With his talent, charm, and wit, Jarred’s energetic performance engages his audience no matter what the venue. Backed by The Park Brothers, this talented group of eclectic and experienced musicians know how to deliver an unforgettable show. They were recently awarded 5th in the Cleveland hot list for best local band. Along with their local recognition, they have performed along the blues highway over the years, from Memphis Tennessee to Clarksdale Mississippi. Individually and collectively, they have opened, performed, and toured with such talents as Samantha Fish, Ike and Tina Turner, Slim Harpo, Son Seals, Jason Ricci, and Johnny Riley to name a few.

Jarred Goldweber and The Park Brothers are forging a new look and sound for what the Blues represents; a new experience that not only makes the audience feel the emotion of the music, but takes them there. They’re adapting the blues to the modern-day sound, a blues band that crosses generations. With this fusion, the band can express the new energy of the modern bluesman with the heritage of the former.