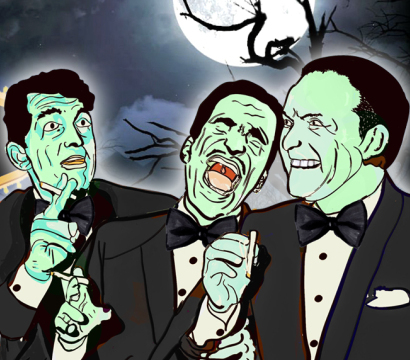 One thing's for sure, They may be Dead, But their voices aren't!

Frank Sinatra, Dean Martin and Sammy Davis Jr. are back in the spotlight -- as crooning zombies -- for the literally undead show that critics have raved blew them away and left them wanting more. Having come back from the dead, The Pack adds a spookish spin to their biggest hits, changing up their lyrics to honor their undead lifestyles. More comical than creepy, more entertaining than eerie, you'll hear all of your favorite Rat Pack tunes with an "undead" twist, including "Come Die With Me," "Ly Me in the Tomb", "What Kind of Ghoul Am I?", and many more!

TONY DIMEGLIO (Frank) Tony is a classically trained vocalist specializing in several genres of singing. He is an Air Force brat originally from Los Angeles, California until settling in Omaha, Nebraska with his family. He graduated from Bellevue West High School and then went on to train at Drake University in Des Moines, Iowa under Professor Leanne Freeman-Miller. He is a Seagle Music Colony and SpringboardNYC alumni. For more information please visit TonyDiMeglio.Me

JOHNNY BLAZE LEAVITT (Dean), An actor, playwright, producer and comedian, Johnny is happy to be back with The Pack, playing the amazing Dean Martin! Favorite roles include Tom in Hurt So Good (Point of You Productions), Terry Du Bois in A Midwinter's Tale (Point of You), and Feste the Clown in Twelth Night (American Theatre of Actors). Recent TV/Film includes Hot Mess (Amy Kersten, Prod.) MYTH, A Short Film (Loosely Translated Prod.), Remedy (The One That Got Away Prod.) and spotted performing stand-up comedy around NYC (including Caroline's on Broadway). SAG/AFTRA, EMC

CORY INGRAHAM (Sammy) Cory is pleased to be continuing his role as Sammy Davis jr. in The Rat Pack Undead. He’s performed at such legendary venues, Broadway Comedy Club and the West End Lounge. He’s also had the privilege of working in such musicals like Ragtime, Hip Hop High and Rat Pack Lounge the Musical. In his spare time Cory enjoys playing his clarinet, working out and attending church at the Allen Memorial church of God! He’d like to thank his husband Petar Kostic forKostic for his support, the American Music and Dramatic Academy where he plans to return next year to finish out his last semester and last but not least his friends he’s encountered on his Journey!

COOPER JORDAN (Producer/Creator) (Creator & Co-Lyricist, Direction) has been thrilled to produce The Rat Pack Undead across the Northeast from Atlantic City to Times Square, with the show's two year residency at Times Scare on 42nd Street. Cooper was the Managing Director & Producer of The Elektra Theater Off-Broadway where he produced over 50 shows including the hits New York's Got Talent and Miles Thorn Master Illusionist. Cooper is a wide range Actor/Producer between New York & Atlantic City and is continuously excited for the future of this show! Biggest thanks to Gene, Julie, Eddy & Anthony Edwards, Marilyn, Mom, Dad, & Zoe, and Grant for all their support and encouragement on this production.

MICHAEL THOMAS MURRAY (Music Director) Actor, pianist, composer, writer and music director, Michael Thomas Murray currently works with Sharon Klein Productions on his award-winning show, Echoes of Etta, his new creation, Sisters of Soul, and Who Loves You: The Frankie Valli Tribute. He arranged, played and music-directed for the on-stage bands in New York hit shows 50 Shades! The Musical, and Forever Dusty, appeared with his own shows at New York's top venues including Birdland, Joe's Pub and the Cafe Carlyle, and in acting roles in Off-Broadway productions including Murder Mystery Blues and Everything in the Garden. Television appearances include Celebrity Ghost Stories, Mysteries at the Museum and Mind of a Murderer. His show Echoes of Etta was featured on the 2014 NBC Macy's Thanksgiving Day Parade broadcast.

They all came to life and boy can they still sing and entertain!

Those were my feelings as “The Ratpack Undead,” now playing at “Times Scare” (669 8th Avenue) in Times Square with talented “Frank” “Dean” “Sammy” and “Marilyn,” let me go back in time and enjoy them once again.

The performance knocked away some winter blues as the stars now “undead,” performed the old songs with some new words.

The premise that Frank Sinatra, Dean Martin, Sammy Davis Jr.and Marilyn Monroe come back to life among the somewhat ghoulish room artifacts (skeleton and crypts) at Times Scare in Manhattan, led to the new words. Those words and premise are good.

What is great is hearing the “updated” (“What kind of Ghoul I am” an example) music and seeing truly fine incarnations of the stars, imitation being the sincerest form of flattery.

The music is timeless and The Ratpack Undead in some way defies death to prove that again.

The show was created by and is produced by Cooper Jordan. I strongly suggest seeing it.

SOLD OUT with Standing Room Sold

Newburgh, NY - Pamela's on the Hudson

DISTRICT CENTER for the Arts

FIREHOUSE CENTER for the Arts

Contact Information
For inquiries on tickets, show schedule, or any other questions regarding THE RAT PACK UNDEAD email us at ratpackundead@gmail.com

*Please contact Cooper Jordan for Up to date info on available 2019/20 dates.

Based on location & transport, Base Rates may be open to negotiation, subject to availability.