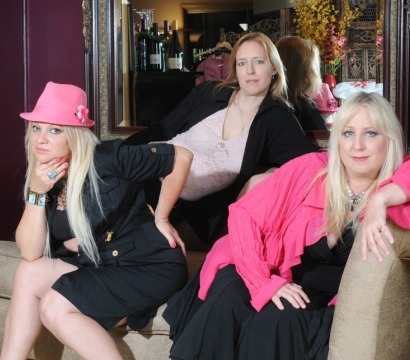 The Scorch Sisters consist of three formidable women who have been friends and bandmates for many years in different situations, and have finally decided to strike out on their own together with their unique blend of fierce, soulful vocals and seasoned, blazing instrumental prowess.

Francesca Capasso (lead and background vocals, percussion,) Alicia Morgan (lead and background vocals, keyboards) and Kimberly Allison (guitar) are each at the top of their game professionally, and because they are such fans of each other's talents, as well as close friends through many years of ups and downs, in 2011 they decided to join forces as the Scorch Sisters - a combination of world-class talents rarely found in the blues world in one band.

The Scorch Sisters bring to the blues a mix of jaw-dropping virtuosity and down-home raw heart and soul, with a sound all their own. Adding a flavor of funk, a soupçon of soul, and just a touch of jazz, the Scorch Sisters' musical gumbo is hot, tasty and soul-satisfying!

They say it's a man's world, but the Sisters beg to differ. They bring a woman's strength, determination, heart and soul to the blues, and they share their passion, heartbreak, joy, and raw, down-home realness with their audience every time they hit the stage. Each one of these women is a headliner in her own right, but when they come together as the Scorch Sisters, there is a synergy that defies comparison, and defines them as a true musical force to be reckoned with.

The Scorch Sisters are ready to bring the heat, and they have talent, energy and soul to burn!

"Francesca Capasso, singing from her soul, with fellow Scorch Sisters Alicia Morgan and guitarist Kimberly Allison, really brought it with their opening uptempo shuffle "Blues For Barnaby" and a scorching (excuse the pun!) guitar solo by Allison on "Still Remember," said Casey Reagan. "Alicia is an awesome keyboard player...Francesca will take your heart if you let her...and you will," concludes Reagan in his review, which ran in American Blues News.

"Scorch Sisters wowed the Real Blues Festival 2 audience...be ready for these Hollywood hipsters because they'll 'blue' you away. I really dig these gals and I think you will too."
Casey Reagan/AMERICAN BLUES NEWS

"The Scorch Sisters seize the blues as their own and subsequently fire it up with a unique intensity. They will demand your respect with their powerful vocals all the while having you wonder where the "Hell" have these ladies been hiding! The Scorch Sisters deliver the blues straight up: can someone say 'Cheers'?"
Jim Lederle/AMERICAN VETERANS RADIO

"Capasso may be on the track to stardom."
Tim Haddock /SANTA CLARITA SIGNAL

"Francesca is one of the most electrifying performers we've come across...
tiny in stature (5'2) but incredibly mighty of voice and energy...think Etta James/Katie Webster/Ruth Brown style vocals augmented by some funky and flat out sexy dance moves. "
Josh Urbach UR/UNIVERSITY REPORTER

"To call this music the blues would be an injustice, as the talent and material goes beyond a single category. Francescs's obviously bluesy, but crosses over and delivers dramatic pop. funk, and R & B music as well, and it's her outstanding ability to encompass other genres that make her so compelling."
Bernard Baur/THE MUSIC CONNECTION MAGAZINE

"(Francesca) reminds some reviewers of 1970's star Janis Joplin, with her passionate, hard-edged voice. But where Janis's edge was rather rough-hewn,
Francesca's is a smooth fine cut.
Her original music has a great pop sensibility."
Jim Fowler / LOS ANGELES TIMES

"...Capasso proves to be an extraordinary singer as she belts out some big solo blues." - Tom Provenzano/LA WEEKLY