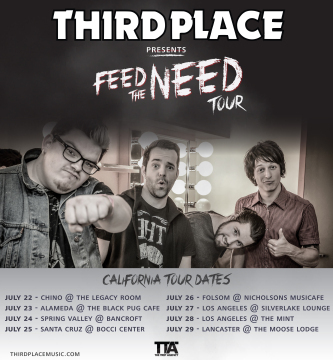 Third Place burst onto the music scene in 2008, during the International Emergenza battle of the bands. The rock band celebrated its ﬁrst anniversary on the night of the Grand Finale at the legendary Medley concert hall in Montreal, ﬁnishing 8th among 250 artists! The following year, Third Place ﬁnished 6th overall! The band then realized that their real passion was performing on stage!

Known for its compelling, dynamic, unique sound and bold performance chops, Third Place released a self-produced demo entitled, Keep Your Dream Alive (2008). The circulation of the album resulted in the rapid growth of the band’s fan-base.

In 2009, their ﬁrst single Look At Me Now reached the 66th position in the Top 100 Palmares Correspondant Anglophone. Furthermore, their music videos for Look At Me Now & Feel The Beat played regularly on MusiquePlus and MuchLoud.

In 2010, Third Place launched their new album Lifeland, which has sold more than 4000 copies since its release date. Third Place was then noticed in many competitions, winning Clictonband, Musiqualité and Ernie ball’s Warped tour in 2011-12 and got to share the stage with many artists, such as All Time Low, Yellowcard, Shinedown, Pennywise & Puddle of Mud.

During the 2011 CMW event, Third Place signed a record deal with the label ”Let Artists Be (L-A be)” and got distributed with ”Select distribution” all across Canada. The record company offered to relaunch Lifeland adding two songs including a cover of You Can’t Hurry Love, originally recorded by The Supremes.

In 2013-14, the band toured Ontario and Quebec to then hit more than 350 stage performances in career! The boys are present in every related music event to promote their material. Third Place has done many interviews and live performances on MusiquePlus and MuchLoud.

In 2015, Third Place has worked hard on writing new material and on the evolution of their new “theatrical rock” sound with the producer Luc Tellier! They’ve independently launched this last EP ‘’Rise of Chaos’’ with two videos; Don’t Cry (May 2015) and Temptation (July 2016).

In 2019, the band won the Rockalypse music contest and were given the opportunity to play their first Italian tour, playing events such as the Subiaco Rock & Blues Festival. They are currently looking to release a new music video and writing new material to release an EP in 2023. The boys are deﬁnitely passionate about music and will stop at nothing!

Playing at the Supermarket on May 2nd at the CMW in Toronto.

Opening for Marc Dupré at MusiFest, Rawdon, Quebec in Canada

Opening for Simple Plan at MusiFest, Rawdon, Quebec in Canada