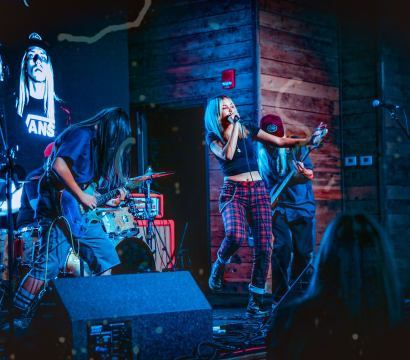 We are a band based out of Southern California, nestled in the Inland Empire. We began in 2015, and a few twists and turns later we find ourselves writing, producing and performing our brand of music for the young and young at heart alike. We love the stage and there is nothing better than a great set; seeing the enjoyment we bring to those in the audience and the excitement it creates fuels us.

Our style has been described as high energy alternative rock with a dash of punk.

We perform throughout Southern California on small and large stages at clubs, bars, community events, festivals and most recently at Warped Tour 2018.

We are a four piece band:

Reece began playing the guitar at age 10. But it wasn’t until he picked up the bass guitar 4 years later, that magic started happening. Today, Reece pours his heart and soul into playing bass guitar. His bass comes to life with a funkadelic style that is strongly influenced by Flea from Red Hot Chili Peppers and Nick Villarreal of Sons of Texas. He packs a potent blend of style and skill with his rich tones, giving Thursdays in Suburbia its authentic style.

Serena’s passion for music and singing began when she was only 3 years old. Her song writing began early on, incorporating her life experience to bring a genuine feel to her lyrics. Serena’s alluring vocal style is influenced by Lana Del Rey, Mazzy Star and Billie Eilish. Serena is high energy and the centerpiece of the group. She loves to connect with her audience and brings musical talent, eloquence, and a flair for the dramatic to the stage.

Liam’s love for music started with the guitar which he picked up at age 7. In just a few years, the electric guitar became an artistic extension of himself which he wields with finesse. These days, Liam not only plays like a boss, but he also writes music and experiments with different styles of expression. Together with his band, Liam translates lyrics into musical compositions that define Thursdays in Suburbia’s unique brand of self expression. Liam is endorsed by EARTHQUAKER DEVICES and VOODOO LAB.

Johnny’s passion for drumming began in the kitchen, beating pots and pans with wooden spoons as a toddler. But it wasn’t until middle school that he decided to take up drums. Johnny is the newest member of the band and brings a sophisticated musical toolkit that includes playing electric and bass guitars. But his true passion is powered by his first love, drums. Heavily influenced by Travis Barker, Johnny likes to play hard and enjoys pushing the boundaries of rock music.

We have played on small and large stages alike:

As most musicians, our interest and experience continues to evolve and we endeavor to represent that in our music and share our passion with our audience.

The Shoppes at Chino

Picnic in the Park Eastvale

Concerts in the Park Harada Heritage

Picnic in the Park Eastvale

The Whisky a Go Go

The Mission Inn Festival of Lights

Eastvale Picnic in the Park

SPEED OF LIGHT are rocking their residency at The Redwood Bar, It's gonna get loud! DON'T MISS IT

Bringing Down the House House of Blues showcase

Los Angeles Showcase at The Wiltern

Check out LA's newest sounds at the 2019 Bringing Down the House showcase! This event is FREE, all-ages and open to the public so come on down to see the city’s top new talent on the legendary Wiltern stage. Help the band get recognition by selecting your favorite band when selecting your tickets.
Featuring: Anneston Pisayavong, Alina Hernandez, Hybrid Odyssey, After The Millennials, Thursdays in Suburbia, Victoria Elise, Jalen Parker

Join us at Saturation Fest 2019, celebrating women in music on the LADIES TO THE FRONT Stage! WIth all female fronted bands of all genres!
FREE Event + ALL AGES + LIVE MUSIC + VENDORS
Stage is located in Lot 16 behind Back To The Grind!

It's the first Kegger of the season!
Happening Friday, June 14th, from 5pm to 9pm in the KCAL Parking Lot. Come on out and join us and a couple thousand of our best friends for some great live rockin’ and ice cold beers to get the weekend started right with:
* Live music from the Fooz Fighters a Foo Fighters Tribute!
* Food (details coming soon)!
* Ice cold beer from Golden Road and Michelob Ultra!
* Entertainment from the Thursdays in Suburbia
* Punch Bowl Social Game Zone!
As always, the KCAL Keggers are absolutely free to attend. Everyone 21 and up is welcome, so grab some friends and come rock out and raise a couple of cold ones with us!