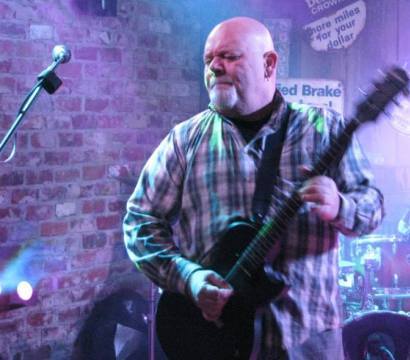 My first musical interest was playing drums at the age of 14. One year later my cousin, David Griffin, taught me some chords on the guitar and I took off from there. I would listen to records and I learned how to play by ear. I have since learned how to read music.

In 1979 I got with some guys my age and we started a band and that was a real learning experience. At the age of 15 years old I played my first club gig. One of the guys worked with my dad so he kept and eye on me . I did this for a couple of years.

I played through out the 80’s and 90’s with a few bar bands.
In 1982, I did a fill in slot for the popular 50’s group, Bill Haley’s Comets. Shortly afterwards I was asked to tour with them, but I reluctantly had to turn them down. In the early 80’s I also played a fill in slot with the classic group The Coasters.
One band of notoriety I played in was a band called The Shakerz. We did numerous opening act slots for some major artist including: Hank Williams, Jr., Highway 101, Confederate Railroad, the B.B. King Homecoming Festival, Atlantic Rhythm Section, Ronnie McDowell, Exile, Percy Sledge, played numerous engagements at Morgan Freeman’s Blues Club, Ground Zero, in Clarksdale, MS. We also performed numerous outdoor musical festivals in the MS, TN, AL, and AK,

From 1996 until 2005, I was the owner and operator of a recording studio in Clarksdale, MS called Studio 61 Recording™. While I had the studio the occasional well known visitor would stop by. These included Billy Gibbons of ZZ Top, Elvis Costello, and B.J. Thomas.

Today I stay busy wearing many different hats, such as singer-songwriter, guitarist, studio-musician, sideman, writing original material, and a studio engineer. I also own and operate primesurf.net, a web/internet services company.