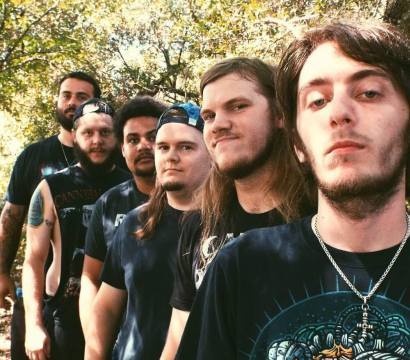 Started in May of 2014 as an idea spawned from two friends, Chris and Paul, talking about the mishaps of old bands. The idea came to jam and just "see what happens". The first practice, friends Max and Azzam showed up. Soon after that we were joined by several bassists and another guitarist who just didn't share the vision of Tyrannophobia. After playing our first show in September of 2014 we sought out another guitarist and a bassist as none had stuck around. In searching we found Rylan and Andy who joined as Bass and Guitar respectively. After a few shows together both eventually left the band due to differences in creativity. Finally in November we were joined by Colin are guitar. He was in Reach for the Sky at the time and had left due to creative differences. We played a our first tour in December heading out on a few dates. Around January we found Ian who stepped in and tried out for bass. The lineup is now complete and we started writing new material in 2015 for an EP we plan to release in 2016. With 6 members in our band, all with varying musical backgrounds ranging from all types of metal and other genres. We add lots of elements from all across the spectrum of music to our sound. Music that you can feel, that you can get angry to, music that will comfort you and music for anyone that has every felt lost or as if they did not belong. We are going for a sound all our own. We plan on starting to tour heavily and are looking to branch out more in FL and the surrounding states. We are a very ambitious band and will continue to push our limits as human beings and musicians. Currently, we are unsponsored, unmanaged, and unsigned and we are looking to change that. We enjoy supporting all types of bands and scenes as we are fans of music in general. With our high ethic standard for not only professionalism but respect, we arrive early and leave late when it comes to shows to make sure we support every band as each band deserves respect, attention and support.

Some of the Bands we have played with:

The Weekend Of Doom Tour Announcement:

We are extremely excited to be going on the road next month with some of our very good friends. Below are all the dates and event links for Facebook. We can't wait to see a ton of new faces and play some new songs that no one has even heard yet. Make sure to come out and bring a helmet, we have some of the most talented bands on every night of this tour, don't miss out!

THE WEEKEND OF DOOM TOUR

We would like to welcome to the phobia, our friend and now official merch guy, Mikey! He has been supporting us for a while and we offered him the job after him just being the coolest person ever so when you come out to our shows go say whatsup and buy some merch!

We are hard at work on our debut EP with 4 of 6 songs written in only a few months after we finish our show obligations we are headed back to work to finish the remaining 2 songs. Stay tuned for a promo in early 2016 around when the EP will be complete.

In the mean time check out our demo of our track "1999 Mode" off the upcoming release.

I WILL WATCH AS YOUR CITY BURNS!

We have the honor of opening for Deathcore legends Whitechapel on the Orlando date of their upcoming tour with Psycroptic and FL metal alums, Culture Killer! We have tickets for only $17.

Head over to www.tyrannophobia.bigcartel.com to buy tickets!

DEAD BETWEEN THE WALLS

SONS OF THE FALLEN

NATION OF DECAY, ENTOMBED IN THE ABYSS, SINGOD, HATE TANK

NATION OF DECAY, VENOMOUS FICTION, NERVBREAK, TRAPPED IN THE APOCALYPSE

THE NETFLIX AND CHILL TOUR

Head over to www.tyrannophobia.bigcartel.com to buy tickets!

BATTLE OF THE BANDS FOR (FLORIDA METAL FEST I)

SPONSORED BY CHUGCORE AND STAY WICKED

FEAR THE CONCEPT/ SHORES OF ACHERON/ ENTOMBED IN THE ABYSS/ LORDIS/ TYRANNOPHOBIA/ I, THE JURY/ SINKHOLES/ GUCCI FLUTE