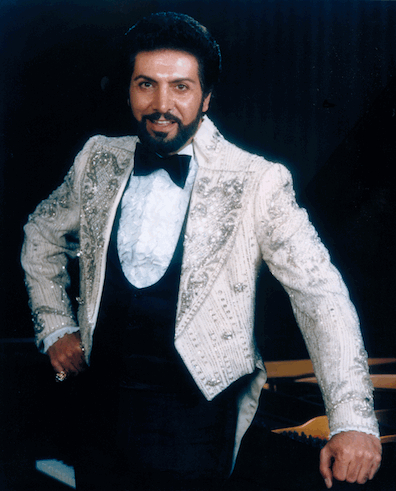 Vince Cardell, Liberace’s only Protege, was born in New York City where he began playing the piano at the age of seven. Over 65 years later and countless performances, Vince is still entertaining audiences throughout the world with his dynamic stylings and inventive showmanship.

Through his own musical endeavors and many years with legendary pianist Liberace, Vince has defined his position amongst the top entertainers of our time. Together, Vince and Liberace toured the world, performing their spectacle of a show for tens of thousands of adoring fans including appearances on The Tonight Show with Johnny Carson, Dinah Shore, Merv Griffen, The Mike Douglas Show, as well as many years playing on The Las Vegas Strip.

Vince Cardell is a part of that classic Las Vegas history which draws millions of visitors to that city every year. From a time of social elegance and Hollywood royalty, Vince enjoyed all the success and excesses that were a part of that by-gone era. Whether it was performing as a solo artist, in a trio or alongside Mr. Showmanship - Liberace, Vince has always had that Spark and Energy which is so attractive and engaging.

Vince Cardell began as Liberace’s stage chauffeur in the mid-seventies, driving the star’s Rolls Royce on stage for his grand entrance each night. Before long, audiences learned that Cardell also has a pair of talented hands at the piano. By the late seventies, he was performing duets with Liberace on stage as well as his own spotlight solo in the show. As Liberace’s sole piano Protege, Vince recorded his premiere album on AVI Records in 1975 “Liberace Presents Vince Cardell” which had an array of musical stylings as well as a guest appearance by Liberace.

Liberace once said, “I’ve had the pleasure of helping many young talents. This album is the culmination of what I feel is the best of Vince Cardell, and the promise of even greater things to come. I predict a brilliant future for Vince”.

Vince has been recognized as one of the country’s outstanding piano virtuosos. His engagements have included New York’s fabulous Toots Shor and the renowned Marco Polo Club at the Waldorf-Astoria Hotel. After many years out west, Vince moved to Nashville to embark at Gaylord Opryland Hotel to perform his musical arrangements for the Dancing Water Show where he was a mainstay for many years performing country classics for a world-wide audience of over 2 million viewers.

Vince Cardell continues to take us along on his musical journey. Allowing us to experience the history and magic of what a true showman embodies. From his dynamic execution to a simple smile, Vince Cardell is a talent, who’s light continues to shine just as bright as the days behind Liberace’s Candelabra . . .

We regret to inform that artist Vince Cardell passed away on May 29, 2012.

Please Check Back Every So Often, For We Have Many New Projects In The Works.

Please Come Enjoy The Holidays With Vince Cardell - Piano Virtuoso and Liberace's Only Protege, As We Celebrate The Season With Beautiful Music And Good Family Fun.

This Event Is To Aid Our Local Community Emergency Management Services (Police, Fire, EMT), As Well As The Francis J. Scarcello Foundation And Will Be Held At The Gymnasium At Charlie Daniels Park, In Mt. Juliet, Tennessee - Sunday, December 18th, 2011 At 2:00PM.

Tickets Are Available For $5.00 Plus A Small Service Fee. In Addition To Your Ticket Purchase, We Would Ask That You Bring (2) Two Non-Pershiable Food Items (Food Pantry), OR Unwrapped New Toys (Toys For Tots), OR Used Phones (Cell Phones For Soldiers).

For Booking, Appearances & Media, Please Contact Us Via The Information Listed Below. Thank You