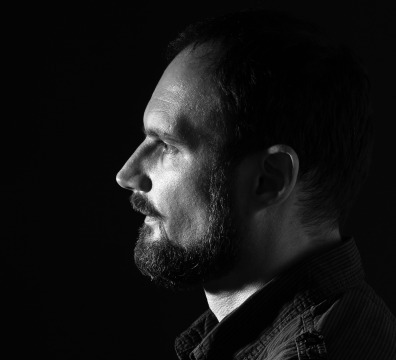 Vince Kuzanagi is a French DJ back in his oriniting city of Lyon (France) after spending 5 years in Moncton (NB/CANADA).

He started his career as event producer during 10 years as “President” of BEE collective. Events organized were taking place in LYON (FR) during the golden age of Rephlex Records, which was a major influence. The main idea was to show cross-genre and cross-culture of Electronic Music. From 2000 to 2010, they received artists like Rob Hall, DMX Krew, Ceephax Acid Crew, Machinedrum, Surgeon, kid606, Ovuca, Milanese, Gescom, Mike Dread, Radioactive Man…

He was also involved in records production and artist development when BEE collective became BEE Records, a French electro/break/IDM label from 2001 to 2012.
After a 5 years break, Vince Kuzanagi started a new Career in 2015 as radio show host, DJ and producer in the Atlantic Canada, focusing on his own taste for techno and sub-genres. But in his mind, the project was to always try to tighten links between all electronic music styles and genres and always tries to melt genres in his sets with some IDM, House, electro or electronica.

From 2015 to 2018,he was presenting the French speaking radio show called "Le Catalyste" on CKUM 93.5FM in Moncton.

The show is currently turned into a podcast series as the "Standalone series" where he receives many artists representing the B side of Electronic Music scene.

During the 90's, He learned Techno, House and UK Rave listening to Radio and Tapes from artists like Prodigy, Altern-8, 808 States, Franky Bones.... In 1995, he moved to Paris and rode the Undeground Parisian Rave scene including Rex Club where he could listen all Detroit masters like K. Saunderson, Kenny Larkin, R. Hood and of course Laurent Garnier. This passion for techno music made him do the pilgrimage to Berlin’s Love Parade in 1997.
At the same time, he raised another passion for electronica and IDM artists like Future sound of London, The Orb, Boards of Canada, Aphex Twin, Autechre and all the Rephlex Records Artists made him grow another point of view on electronic music and creativity this music was showing in the end 90's and early 2k’s. this made him travel across European festivals like Dour, Montpellier legendary Borealis Rave and Barcelona Sonar Festival.

In 2000, with some teammates, he started organising gigs in the country side arround Lyon(FR), following the FREE PARTY culture initiated in the UK but focusing on new genre like glitch, trip-hop, Clics'n'cut, Electronica, Minimal, Drill'n'bass, Breakcore, Electro and even PostRock.

During 10 years, together, they have organized Electro/electronica/braindance events in LYON and even founded a Record Label called BEE Records (https://www.discogs.com/label/18690-Bee-Records). The idea was to always show the cross culture surrounding techno and electronic music. During a decade, it was a chance for him to meet some artists like Machinedrum, DMX krew, Kid606, Milanese, Mike Dread, Luke Vibert, Gescom, Rob Hall, Radioactive Man, Umwelt, OVUCA, Ceephax Acid Crew and Surgeon...
The BEE story ended in 2012 when all historical members of the crew split off to focus on personal careers and family.

In 2014, he moved to Canada after a career turn as computer engineer in Telecom industry.
He has been active in Atlantic Canada regions as a DJ and presenting the French speaking radio show called "Le Catalyste" on CKUM 93.5FM in Moncton.
He also hosted a residency at Laundromat Expresso Bar in Moncton called "Electronic #" where he travelled through electronic music history from Chicago ghetto tek to the dark Berlin Techno.

As a DJ, his sets are mostly inspired by artists like Rob Hall and 90's and early 2K's Laurent Garnier sets. His own taste for underground melodic techno and oldschool progressive house are also a big influence and he often includes some electro or IDM/electronica tracks. His process is always to think his sets as a journey, going up and down, deep or high, depending on mood and audience, and he always tries to bring listeners some interesting nuances or attractive tracks he grabbed from labels as a radio show host.

All show available heree and here:

Le Catalyste season 4 resume on September 2018
Oct, 11
"Le Catalyste" season 4 will start on September with numerous guest planned, and as always a fine selection of rescent news from IDM and techno world.

ECMA Awards 2018: nominated as "Media Person of the Year"

Vince Kuzanagi is nominated in "Media person of the Year" category for its work as radio show preenter at "Le Catalyste" Radio show, and its work and acivity to promote local heroes !

We're excited to unveil "Forbes", the new Techno EP produced by French producer settled in East Coast Canada Vince Kuzanagi. It contains remix from legendary Andrew Duke and Spanish artirst Singular (Spain). The Ep was released on 01/01/2018 on Spanish imprint Ibiza Boys, managed by Van Czar, which already released Eps from artists like G-prod, Orlando Voorn, Terrence Dixon, Protyv, Van Czar, Andrew Duke and many more. You can listen or download your promo copy using the Blue Link bellow. We would appreciate your comments and feedback on this release. Happy 2018 ! Ipseit promotion team.

Vince Kuzanagi will receive Paranerd Live at Laundromat Expresso Bar in Moncton, following his recent release on Touched record label. The night will be an IDM/electronica focus and Paranerd was also asked to provide his top 20 Rephlex tracks.

"Le Catalyste" season 3 will start on 11th October with numerous guest planned, and as always a fine selection of rescent news from IDM and techno world.

The track on soundcloud:

The complete compilation on BeatPort:

Weekly radio show, 1h30 of news and DJs set, with some Guests from time to time.

On going season started in September 2016:

Another all nighter by East Coast Groove. Bringing you the best Underground electronic music from the Maritimes and all around.

Electronic # 6 at Le Laundromat / with Danderson

Electronic # 6 at Le Laundromat / with Danderson

Have you ingested your daily dose of dance?
Are you being nourished?
We got the prescription.
No artificials,
natural supplements

Electronic #7 at Laundromat With Bing, "Baltimore to chicago"

5th year of Future Forest at an all new location just 30 minutes from Fredericton on the side of a river.

Electronic #9
On this one, Jaguar Knight and Vince Kuzanagi will bring out vinyls bought looooooooonnng time ago for a retro Techno and Electro Event !
Come on check with us your knowledge of the history of the true techno !

FLASH festival takes over Assomption Place on Main Street with installations, live shows, performances and a never seen before experience.

Ice Carving - 8 to 11pm
Two artists from Caraquet will use chainsaws, heat and carving tools to turn giant ice blocks to magistral sculptures

Numerical Portraits
Jordy Jeppesen will draw YOUR face live, on an electronic drawing pad connected to a projector making it giant.

PHASE by Wasko - 9 pm / 10:30pm / 11:45pm
Halifax-based visual projection mastermind Wasko takes over the impressive 20 storey Assomption building with a giant 3D mapping piece. The performance is choreographed to an original score and visible from Magnetic Hill. Performances will be roughly 10 to 15 minutes long and presented at 3 scheduled times on Saturday night.

Incendia Motus. - 10:15 pm
Incendia Motus is a breathtaking fire performance group from Halifax. These performers share a love of audiences. They are constantly striving to evoke enthusiastic responses with the mind-blowing feats they perform; artfully combining object manipulation, audience participation and improv comedy to weave around their fire-based breath-taking Acrobatics. From the streets to full-scale productions, Incendia Motus is a versatile and breathtaking Circus crew.

9:15 GORDON GETS LOST - (Heated tent)
Going to a Gordon Gets Lost show is like being at an electrified kitchen party. All the elements are there; great friends, talented musicians playing for the love of it, and that feeling that you just witnessed something special.

10:30 Scientists Of Sound - (Heated tent)
Scientists of Sound's signature anthemic electro sound unites raging guitar hooks with heavy club grooves and epic gang vocal melodies. Combining hard hitting beats and the frantic energy of a rock band with something to prove at every show, an SOS set leaves the audience feeling like they just climbed a huge mountain.

English:
Come and share with the MCTN crew the love for electronic music and techno or just the pleasure to be together (with a good beer! ;))
with 3 live machines from Anome, Paranerd, and Robert T.

Note: this is the closing event of this "Electronic #" event series I had the pleasure to organize since 2015 as I'm returning to France in January.
Warm thanks to all who joined as artists, all who attend to the event or even just thought about it !!
and a big big thank you to Marky who gave me the chance to play in his bar when I was a fresh newcomer!