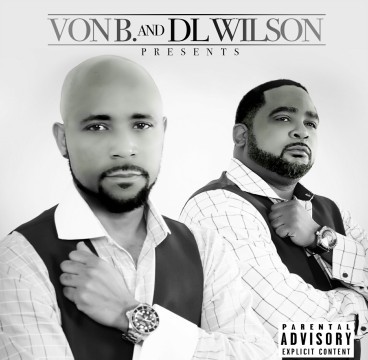 Von B. and DL Wilson BIO

Von B. was born in Los Angeles, CA. but raised in South Bend, IN. D.L. Wilson was born and raised in South Bend as well. They were both members of a high school R&B singing group that made a name for themselves on the local scene. From talent show victories, local news interviews and TV show performances; they were more than just average high school students. Major R&B recording artists such as the duo/group Men at Large, Joe Little (of The Rude Boys) and the late, great Gerald Levert were a few artists that offered a positive influence, great advice and the opportunity to perform. Their group sang background vocals to the HIT single "I’m So Alone" with Men at Large, live on stage. After many years had passed, the hunger to write, create, record, arrange and produce continued to grow stronger. As a result, an album project entitled The Lost Chronicles of DL Wilson came from these two (both co-executive produced the album). That debut album was just the beginning. Years later, a separate single release entitled “Tell Me Which Way to Go” started to make some noise. Obviously, these two artists started to create a buzz. Finally, in 2016, they decided to join forces as a duo/group and formed Von B. and DL Wilson. Both singers, songwriters and recording artists in their own right, they came together to put all of their experiences and talents together on a project that was destined to happen. Von B. and DL wrote, recorded and officially released the smooth, toe tappin, grown & sexy anthem entitled “She’s Unbelievable” in 2018. Pandora Radio picked up the duos’ single which began to expose their sound to the masses. In fact, Von B. and DL Wilson achieved one of their goals, which was to hit the music charts! They made the Top 30 INDIE SOUL CHART with their debut single “She’s Unbelievable” on 11/11/2018 (Published DRT Report). They describe their sound as ‘real good, feel good music’. The kind of sound that is catchy, innovative, and different but yet with a familiar urban/soulful-vibe! Some people describe their style as a ‘modern day throwback’ with silky smooth harmony, mixed with a creative story-telling writing style! These men haven been interviewed and featured on music blogsites and in-studio radio stations. Other promotional outlets include The LYFE Magazine, a trendy-urban magazine; both FM and online radio stations, D.J.’s from Atlanta, New York City, Tampa, Houston, South Bend, London (UK), Germany and many European countries. Moreover, SoulTracks.com featured the talented duo. SoulTracks.com is currently the most popular soul music website and resource in America. Von and DL wrote, performed and arranged all of their vocals on the album with no ghostwriters! A few of their musical influences are the late ‘King of Pop’ Michael Jackson, Stevie Wonder, Marvin Gaye, Donny Hathaway, The Temptations, gospel greats Daryl Coley and Take 6. Additional R&B favorites such as Joe, Brian McKnight, Musiq Soulchild, Avant, Boys II Men, Jodeci, Blackstreet and Intro. Von B. is related to one of the first male recording artist under MOTOWN Records. The late singer, songwriter and recording artist Marv Johnson. MOTOWN’S founder Barry Gordy and Marv Johnson co-wrote and recorded his first HIT record entitled “Come to Me” in 1959 distributed by UNITED ARTIST reaching #30 on the Billboard Hot 100 Chart. Von B. and DL Wilson released their long-awaited album project entitled Von B. and DL Wilson Presents...during the last quarter of 2018 and they are just getting started! This R&B/Soul duo will be on the indie artist 'watch list' for 2019 and beyond.

What's the 411 since the album release?

Since their album, Von B. and DL Wilson Presents...the end of 2018, the dynamic duo has been slowly building their PR campaign, team and radio promotion. As the overseas online radio family continues to push Von B and DL Wilson's music, fans are starting accumulate, not just locally but globally. A massive international indie radio network has agreed to continue to push the duo's music to over 40 countries in Europe and beyond including SoundCloud playlists and other music media outlets. Additional countries include Brazil, Spain, Netherlands, Germany, Grenada, The UK, France, Italy, Australia and the US. Their "slowly but surely" approach seems to be paying off as their fanbase continues to grow and move the duo forward into live performances very soon! Their album entitled Von B. and DL Wilson Presents... can be purchased everywhere music is sold and streamed. Make sure to continue to support these indie artists!

THE WAIT IS FINALLY OVER! VON B. AND DL WILSON ANNOUNCES THE RELEASE OF THEIR HIGHLY-ANTICIPATED ALBUM entitled VonB and DLWilson presents...featuring their lead off single "MR. DJ STOLE MY GIRL", available on SPOTIFY and is in digital stores NOW!! These fellas have worked very hard to give the music lover a 'Timeless Album'! with HITS like 'GIRLFRIEND' (feat. Kuzzo), 'HERE WE GO AGAIN', 'SHE'S UNBELIEVABLE', 'FOOL 4 LOVE', and even an Acoustic Guitar Cover of one of the most ICONIC SOUL songs EVER recorded...A CHANGE IS GONNA COME!

Pre-save the album STARTING 10/19 on SPOTIFY! The Project OFFICIALLY DROPS EVERYWHERE 10/26! The name of our album is Von B. and DLWilson Presents...

A lyric video will be released for 'MR. DJ STOLE MY GIRL' as well available on YOUTUBE and this website under the VIDEO tab. Make sure you support this DYNAMIC DUO as they gain traction! Download, Steam, Share, repeat!!!

RAIRADIO is the NEW VOICE OF MILLENNIAL MUSIC! In collaboration with L.A. based RNH Magazine, Urban/R&B artist Duo Von B. and DL Wilson were interviewed to talk about NEW MUSIC, who they are and the grind/struggles it took for them to get here! Check out the link below for the full Q&A Interview!

JSTYLZ lead singer from R&B Super Group BLACKSTREET co-signs and gives a thumbs up on our single SHE'S UNBELIEVABLE!

One of the most shocking response we've gotten so far! Von B. had a conversation with one of the lead singers JSTYLZ from BLACKSTREET on IG between his meetings and Von B sent JSTYLZ the link to this website. Von B. says during the DM convo on IG, JSTYLZ gave some great 'nuggets' and words of wisdom that really helped motivate us even more! Von B. also found out they both have a music friend in common that also works with TEDDY RILEY! Producer, artist and South Bend's own TSWANG! After some time during the convo, JSTYLZ listened to the single She's Unbelievable and said 'NIce Bro, Very nice'! 'Keep pushing' 'No Days Off' and stay 'Musicfied'... JSTYLZ coined phrase. Whomever is reading this just listen....my brother DL and I have been at this music thing together, apart and now back together in a whole new way now! We chose to come together to create a sound that would be different and to create a real good, feel good vibe at the same time! With so many people against us on the low, and with so many hindrances who knew I would be having a full blown DM convo on IG with JSTYLZ one of the lead singers of the legedary R&B Super Group BLACKSTREET! Here is my point for bringing all this up...Don't ever give up on your dream, no matter what the noise is!, even if it's from your own family! Master your own craft and don't copy or try to be like anyone else! Be Yourself!! Pray!, that's right Pray!! Have faith in the True and Living God!! Because He can open doors for you that no man can!  And make good music!!! PERIOD! Think outside the box but to thine own self be true! Word up! -Von B. and DL Wilson.

Rnbjunkieofficial is a blogsite that features NEW MUSIC from Major and Indie RnB artists from around the WORLD! Feb 2018, they caught up with us after we launched our debut single entitled She's Unbelievable! They showed love by helping us promote our Music Video for the single via VEVO! Here is the link below!

Contact Information
For BOOKING, INTERVIEWS, DJ DROPS and all MEDIA, please leave your best return contact info and we will respond back ASAP! Business email is apneuwaymusic100@gmail.com

This is the official contact information page and FAN PAGE for VON B and DL WILSON!

Please ADD YOUR EMAIL ADDRESS TO THE FAN LIST for 'HOT OFF THE PRESS' and the MOST CURRENT INFO from, NEW MUSIC and what RADIO STATION IS PLAYING OUR MUSIC, FEATURES, VIDEOS, LIVE PERFORMANCES, HOW TO DOWNLOAD/PURCHASE OUR MUSIC and INTERVIEWS!!