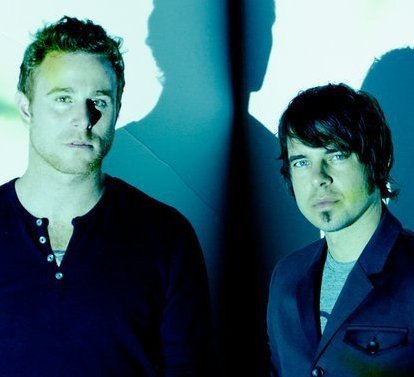 Galvanized by their combined experience in the studio and on the road, San Diego based musicians, Bryan Stratman and Michael Cooper are blowing up the indie-electro scene with their new project, Hyena.

The buzz is amplifying quickly with comparisons to international sensations like Cut Copy, Phoenix and Does It Offend You, Yeah? Hyena's unique way of lacing dance beats with timeless pop melodies with have global dance floors needing more.

Dark, electronic-fueled beats interwoven with Coop's organic drumming juxtaposes Strat's upbeat synths and driving bass lines seamlessly and the lush vocal interplay between the duo adds a depth which sets them apart from the rest.

Currently, the R.A.W. remix of Hyena's 'Kill Kids' has become a staple on Bassnectar's world tour and easily the heaviest bass drop of his set. But, it's Hyena's own high-energy live performances that are most spectacular, including surreal visual projections that turn the whole experience into an electrifying ambush of the senses.

Hyena has been nominated for Best Electronic Band of 2010 and 2011 by The San Diego Music Awards already, as well as opened up for The Bravery at Milwaukee's Summerfest.