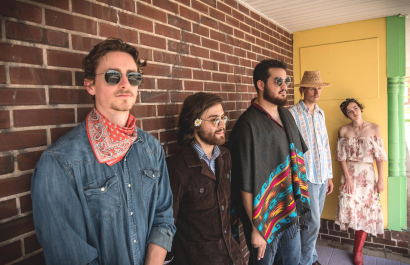 Having just released their self-titled debut album, the group has established themselves as a band to watch!

wtf is preparing to hit the road again from austin, tx to new orleans in early 2018.

"aiming to give people a sense of discovery"- LaCrosse Tribune

"It falls into a sweet spot somewhere between Indie Rock and Americana, the latter courtesy of a slight twang and a sweetly melancholy disposition." -Reviler.org

“Beyond catchy, it delivers a kind of honest tough love message that manages to be very upbeat at the same time.” - Rift Magazine

"Thanks for the Compliment" from WTF's Debut Album Release Show

WTF performs "Thanks for the Compliment" live at Icehouse MPLS for their self-titled debut album release show. 8/31/17

Be sure to check out the full album and order your copy here...
https://wtf23.bandcamp.com/releases

Warren Thomas Fenzi speaks with Justus Sanchez and Phil Nusbaum at Jazz 88 KBEM 88.5 about WTF's upcoming debut album release and Kickstarter campaign to fund the printing of Vinyl, CD's, Posters and hiring a film crew and musicians for their release show at Icehouse MPLS on Thursday, August 31st. The release show will be sponsored by The Current!

Reviler.org Reviews WTF's single, "We Were Never Meant To Stay The Same"

Reviler.org's Jon Behm reviews WTF's first single, "We Were Never Meant To Stay The Same". Check it out here...

Rift Magazine's Rebecca Marx interviews Warren Thomas Fenzi on the new single, upcoming album and what Kriyative Emblems is all about!

"We Were Never Meant to Stay The Same" Single Release

WTF released their first single "We Were Never Meant to Stay The Same" at Viuex Carre on January 7th, 2017. The venue was packed as WTF performed alongside 26BATS!, Lucid VanGuard and Christian Wheeler. The single calls for change while hinting at Warren Thomas Fenzi's Indie Rock influences. Overall an uplifting and catchy piece of work that was beautifully produced by Christian Wheeler.

WTF will be performing with Thomas Abban at Aster Cafe in Northeast Minneapolis.

WTF will be performing as a trio for Brian Pat & The Weather Under's album release show.

WTF will be performing at Trident Booksellers in Boulder, CO during their West Coast Tour on Saturday, June 3rd from 7:30-9:30pm.

WTF will be performing at Campus Coffee Bean in Flaggstaff, AZ from 6:00-8:00pm during their West Coast Tour.

WTF will be performing at Bar Lubitsch in Santa Monica, CA on June 10th at 7:30pm.

WTF will be performing for the Err art collective showcase in Minneapolis, MN along with various other artists on Wednesday June 14th, 2017. More info to come!

WTF with be performing with Joe Kopel at Aster Cafe in Norteast Minneapolis! $7 at the door, music starts at 9pm.

WTF will be performing alongside Tabah and Average Mammals at The Red Herring Lounge in Duluth, MN on July 22nd, 2017.

WTF will be kicking off their Midwest Tour at Vieux Carre in downtown St. Paul on August 3rd with Joe Kopel and Sam Howden. More info to come!

WTF and Sam Howden will be performing at The Root Note in Lacrosse, WI on August 5th, 2017.

WTF and Sam Howden will be performing at The Elbo Room in Chicago, IL on Sunday August 6th, 2017.

WTF will be performing with Ashley Groves at Aster Cafe in Northeast Minneapolis on Thursday, October 19th at 8pm

WTF will be opening for The Stone Foxes at 7th St. Entry on Wednesday, October 25th at 7pm! Buy your tickets here...