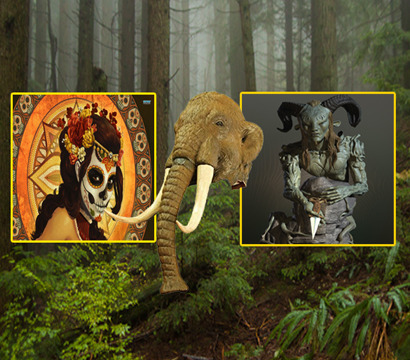 "What happens when a bomb is detonated in close containement

by a cripple in an elephant suit? That's what I call entertainment"

Xtul is what happens when three disaffected deities take over a patch of deserted woodland and fill it with genius level runaway children armed with computers and home-made explosives. And they all form an experimental Hip Hop Band.

The Gorillaz are all very well, but they are just cartoon characters. Xtul are deities, and they are also - by any normal stretch of the imagination - criminally insane.

Xtul is what happens when Throbbing Gristle, Kurt Weill, and Dr Dre meet up in a bar owned by The Manson Family and have very nasty sex with each other.

Make up your own mind.

Genocide is the B Side of the 2014 Christmas single from Xtul. I hope it replaces 'Mistletoe and Wine' in the affections of the great unwashed

I am hearing disturbing whispers that those peculiar folk who apparently operate from a community deep in the woods on the Cornish border, are releasing a two song Christmas single. They apparently harbour the wish that "hope it replaces 'Mistletoe and Wine' in the affections of the great unwashed". I would hazard a guess that a song called 'Genocide' featuring what I can only imagine is a totally unlicensed David Bowie sample, is unlikely to be out for very long in any form before a Cease and Desist letter comes. And as for it becoming a perennial Christmas favourite? Who knows? But it is in far better taste than many Christmas songs. I can't wait for the A-Side next week.

Leave me a message. We shall get back to you if we feel like it.
Information Request