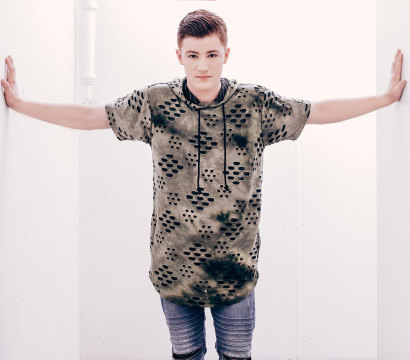 Alex is a 21-year-old up and coming singer/dancer from Philadelphia. Despite his age, Alex is a seasoned performer and has performed hundreds of shows for crowds big and small.

Alex worked with many talented people like producers Yonni and Jim Beanz, as well as, singer/songwriter Guordon Banks. While working with Jim Beanz he became the #1 featured emerging artist on the “Now 54” compilation CD.

Alex has a growing online fan base. He has 276k subscribers and almost 104 million views on YouTube. This popularity gave Alex the opportunity to perform at Vidcon in June 2016.  He also has 26.3k followers on Instagram, 37.2k followers on Twitter, and 13k fans on Facebook.

Also in 2016, Alex was asked to appear on the first season of the kids’ show Wonderama, which aired nationally in in January 2017 and reached 40 million homes. They enjoyed working with him and have invited him to come back in upcoming seasons.

Alex also gone on multiple tours with High School Nation, performing along side The Plain White Ts and Silento.  During the tours he performed at high schools around the country to promote art education.  While on the tour Alex made the front page of the Fresno Bee and was featured on abc30's morning news.

Alex was featured on the Love & Hip Hop New York episode "Peace Talk" in 2018 while working with Yandy Smith.  He was interviewed on numerous radio shows in the Atlanta area while promoting his song "Show Me".

Alex B, Yandy Smith’s new artist made an appearance on episode 12 of Love and Hip Hop season 8, “Peace Talk.” He was born and raised in the Philadelphia area and loves performing in his hometown.

Alex B on the High School Nation Spring Tour 2017

Alex is the only performer other than The Plain White T's mentioned in the article.  He is mentioned after the 'Hey There Delilah' video.  He is also featured in the title video.

Alex B.’s “Chasing Trains” Music Video Will Give You All The Feels

It’s only a couple of days into the new year and it looks like we’ve already found our fave song of 2017 – none other than the remarkable Alex B.’s excellent song, “Chasing Trains.” - Alexis Joy of AwesomenessTV.com

Fresh with solid star power is the best way to describe the 15-year-old pop sensation, Alex B - Niji Magazine

"Alex 'Alex B' Buonopane may be young, but he has accomplished more than the average teenager." - Philadelphia RowHome Magazine page 40