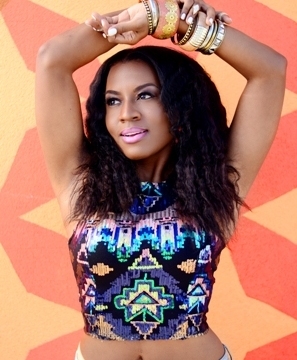 Candice Ferguson is an American Recording Artist who was born in Roanoke, Virginia and raised in Houston Texas. She has an effervescent, radiant, glowing sound and glorious vocal strength. Candice found her gift in singing at the age of 11 when she auditioned for and was chosen to join her middle school choir. By age 16, Candice joined a gospel group called Agape 3:16 which dismantled shortly after only one short year. After the split, Candice continued her pursuit as an R&B solo artist and began recording in studios, collaborating with local artists in Houston, and performing at various venues around Texas until she decided to spread her wings and move to Atlanta, Georgia not knowing anyone.

Atlanta proved to be a very promising move for Candice as her career began to take shape before her eyes. She began performing at various shows in Atlanta, and surrounding states. While in Atlanta, she vocal trained at Jan Smith Studios, one of the top vocal studios in Atlanta; which is famous for training many of the successful Gold and Platinum selling artists you see today. She has had the opportunity to work with successful songwriters and producers such as Dayton Wellington - writer for J. Holiday, Terrence Hancock, JStylz from the group Blackstreet, Spec Turner who has written for Whitney Houston, and Grammy award winner Tommie Ford. She was also afforded the opportunity to expand her talent by performing the National Anthem for the Nascar Nationwide Series televised live on ESPN2.

Candice now resides in Los Angeles, California where she has studied acting at The Actors Workout Studio, and was cast as Tina in Sister Act, which is an uplifting musical comedy hit based on the 1992 film. She is currently continuing her pursuit as an Actress and Singer and is vocal training at the White Hall Academy, and mastering the art of learning the Acoustic Guitar. She has been given the opportunity to perform the National Anthem for the WNBA team, Los Angeles Sparks, as well as the professional NBA G-League Team, the South Bay Lakers. Candice is continuously in pursuit of perfection, always wanting to hone her craft, and remains in acting classes, and in the studio recording, writing, and performing in the Los Angeles area. She hopes to encourage everyone through her music, and for each person to know that regardless of the things you've been through in life, giving up should never be an option, and you can still pursue your dreams and goals.