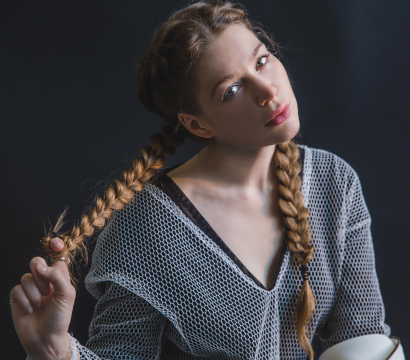 Brooklyn-based singer, songwriter, producer and multi-instrumentalist ÅMBE creates a deft and entrancing electro-pop hybrid, masterfully blending her cascading layers of violin and piano, with hypnotic synths and minimalist beats. Her sensual vocals (which are often chopped-up and manipulated), coalesce with evocative electronics. Her heartful songwriting and remarkable vocal range creates an unmistakably recognizable sound. In 2017 ÅMBE released her debut EP “Enemy Of The People” on ADIM Records, along with a music video for the single “Of Your Crimes”. This has brought ÅMBE quite a buzz and features in RIFF Magazine, SOM Magazine, Glamglare, Wolf In A Suit and SBS among many others. ÅMBE also writes and produces songs for other recording artists in the US and all around the globe. Among other collaborations, ÅMBE has been recording and performing with Grammy-winning composer Fernando Otero, and was the featured vocalist on his grammy-nominated “Ritual” album. She has performed in such venues as Rockwood Music Hall, Pianos, The Cutting Room, Nublu, Bitter End, The Delancey and 92Y Tribeca among others.