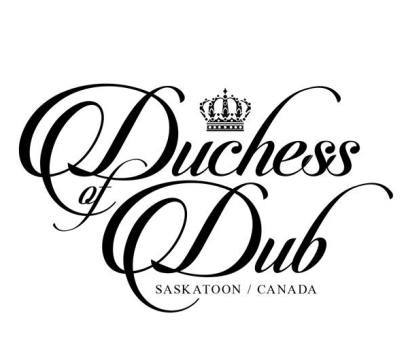 No stranger to the world of electronic music, Duchess of Dub has been deeply rooted in the Canadian electronic music scene since the early days when it was still very much underground.

Originating from the prairies of Saskatchewan Canada, Her Grace was first inspired by the electronic music culture in the early 1990's by local promoters and DJs (Plastic Puppet Motive club and friend Deko-ze, Kevin K and Techno Tom {dj's from local radio CFCR's "New House Culture"show}).

After a personal hiatus the Duchess has returned to her love of Dub, Tech, House and Techno music and has discovered her passion for mixing the sounds she feels eternally connected to.
"There something about it I cannot get enough of!" she states.

Her debut show, was opening up for Saskatoon's "Souled Out Wednesday" of June 2013 which was a resident night promoted by local DJ and producer: Dr. J of Roots Forward Records where the show promoted local talent. This was her first gig which showcased her skill and has brought her back into the scene she has always loved.

The Duchess has recently been selected by numerous known netlabels and was featured weekly on Birmingham's Uk's Electroshpere Radio. Featured on Chillkyway.net. And very successful plays in youtube with Germany's city of Aachen's famed Aixelent video youtube channel with over 100,000+ views in all videos total. Screen FM's radio Echogarden and many many more.

Many mixes later (100 in total and growing as more are created) she has received much internet acclaim for her deep dubby vibes and love for minimal dub, tech, house music genres.

As the vibe of the room and audience wanting even more she can adapt to highten the audience even more by matching with the vibe of the fans there to dance away the night. She can keep them guessing what will be featured at shows attended by the Duchess.

Nominated in the catagory of Electronic Artist Of The Year

Nominated in the Indigenous Artist Of The Year

Featured Spot on Transmitter-Radio from Hungary

Duchess of Dub - Our Devices Of Media Madness

Featured on a radio station where it is known more than 2,000 turn in daily:

More audio and video mixes to the net.

Coming Soon To A Screen Near You.

Celebrating Canada Day in Friendship Park within the city of Saskatoon, Sk. Opening the celebrations with a one hour set.

Contact Information
Thank You for taking your valued time to view this page.

For bookings: Please leave your information to:

(Still wish for more? Please Google: Duchess Of Dub and the web will show you my history.)